Consolidating three modules into one…

In previous versions, you had a separate module (executable) for analyzing variable data, analyzing attribute data, and visualizing data with dashboards. Now all of these are in one module.

This means that you can get to everything from one place.

While the convenience of this is obvious and intuitive, I want to point out something that may not be quite as obvious.

Long time GainSeeker users are familiar with the concept of the Desktop. For many years, GainSeeker made it easy to save a group of charts in a Desktop. You could save the charts with relative dates (such as “current week” or “last 24 hours”), and whenever you opened the desktop, GainSeeker would get the data relative to the current date.

Consolidating three modules into one means that you can have a single desktop that has a dashboard, a variable control chart, a Pareto chart, and a yield chart displayed at the same time. We call this a MultiFunction Desktop because you can add any data in any format to a desktop for easy retrieval. 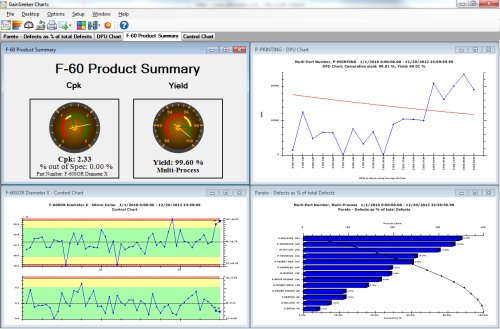 This feature can save a lot of time, and make data much more visible and usable.

While we’re looking at this Desktop, take a look at the new tabbed interface. The charts above are tiled.

But if you double click on one of the tabs, you make that chart fill the entire screen. And the other charts still show up under their tab at the top of the page. This makes it easy to step through a whole family of charts with just a few clicks. 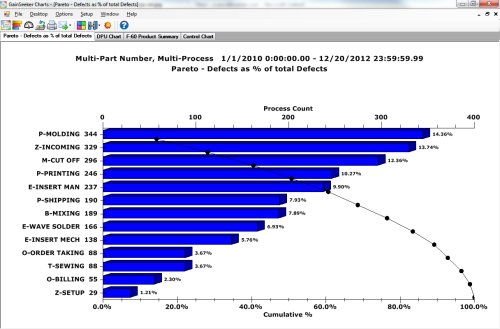 Stay tuned. In a few days we’ll take a look at some more of the cool new features in the new GainSeeker Charts module. Use the ShareThis button below to mark this page, leave a comment, schedule a conversation, or call 800-958-2709.