GOSHEN,INDIANA January 24,2020—Hertzler Systems Inc. has released version 9.3 of its flagship GainSeeker® Suite Software platform. This release has nearly 150 enhancements. For the first time, Spanish and French language support will be native for PC Collect data entry. The new Data Canvas provides operators instant visual feedback of the data being recorded right on an image of the part. This is especially useful for clients measuring large parts with probes like the Solartron Orbit 3 . HertzlerNet customers can request the update here.

Localization support for Spanish and French added to PC Collect 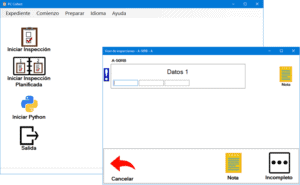 The language used by PC Collect can be set by a command line parameter, a language setting for the GainSeeker user, or the language currently being used by Windows. The user can also use the menu to manually change the language. 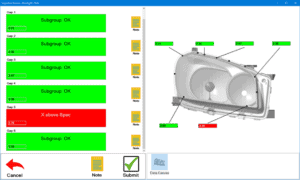 A sub-inspection with Numeric Input tests for measurement data can now display those tests on the side panel in a Data Canvas. As the user – or a connected device – enters data for these Numeric Input tests, those values are also displayed at the corresponding locations on the Data Canvas. For a sub-inspection with many Numeric Inputs, this helps the data entry user to quickly understand which measurement is generating real-time alarms and immediately take appropriate steps.

Support for data collection from Solartron measuring devices has now been incorporated into GainSeeker Inspections and PC Collect.

Major Improvements to Side Panel Chart in PC Collect

You can now ensure that Numeric Input tests and their corresponding side panel charts are filtering for the same values when calculating Control Limits for real-time failures. Charts are now drawn more quickly in PC Collect, and we have streamlined how often we update those charts to speed your process of data entry. There is also a new set of Python commands for side panel charts (and other tabs on the side panel) to give you better control of what is displayed on the side panel during inspection data entry.

GainSeeker is now tested and supported on MINITAB 19.