Consolidated Container Company (CCC) is one of the largest suppliers of rigid plastic packaging in North America, with a national footprint consisting of 59 rigid plastic packaging manufacturing facilities and 2,300 employees. Many of their facilities were using outdated legacy information systems, and the company had no formal standardized quality data system. While some plants had modern solutions with accurate, actionable quality information, others were operating with archaic technology, and many were still operating off of paper-based workflows.

Lacking standard systems and a shared data platform, leaders couldn’t easily see what was going on in the plants. According to Vicki Slavik, Corporate Quality Director, the company was “an internally focused company, and quality was a pain point for our customers.”

A new sense of urgency emerged when the company came under new ownership and a new senior leadership team in 2012. The new team came from industries where corporate-wide visibility into real-time Statistical Process Control data was commonplace. With these heightened expectations, the Company’s quality data systems had to evolve.

Matt Simpson, Corporate Quality Systems Manager, was tasked with recommending a single system to deploy across the company. The new system would provide plant-floor personnel with up-to-the-minute information about their asset’s performance. At the same time, the data would be rolled up across production lines and manufacturing facilities so that leadership at the local and corporate levels could easily see what was happening.

Simpson developed a list of features and functionality needed by the company. He weighted the list by priority, and put ease of use for the operator as the most important priority. His logic: the operator is the critical starting point for collecting data. If it is too hard, too time consuming, or frustrating in any way, it would not get done.

“The heaviest weighting went to the operator,” Simpson said. “That was first and foremost. If it’s not easy for the operator, it doesn’t matter how easy it is to analyze data because the data is not going to get put in.”

Two other top priorities, according to Simpson, were data analysis and flexibility. “Next on the list was ease of use for analyzing data, followed by flexibility of the system. There were other criteria, but those are the highlights.”

With that list in hand, Simpson surveyed plants across the company to determine what software was being used for Statistical Process Control. From this survey, the Quality team identified three potential solutions, including GainSeeker Suite.

Simpson asked the vendors to rate themselves, and then invited them to pilot their solutions in one plant using live data from CCC’s production lines.

GainSeeker Suite Selected – Ease of Use a Key Factor

GainSeeker Suite became the clear front runner because it was easier for the operators to use, it provided superior data analysis, and more flexibility.

Simpson said, “The other main vendors we looked at struggled significantly in ease of use for the operator. Their tools were very rigid. You collected data in the defined way their system said you were going to collect data.”

For Simpson, the biggest difference with the other vendors was the inability to adapt to the operators’ work processes. “You could change what data you were collecting, but it wasn’t very flexible as far as what I would call workflow. What does it look like to the operator, and how does the flow line up? I really didn’t have that much control of the look and feel. That was the biggest issue.”

GainSeeker also provided superior data analysis. Simpson explained, “One of the packages we looked at was subpar for data analysis because plants that used it exported everything to Minitab for analysis.”

GainSeeker’s flexibility proved to be a significant bonus for Simpson and his team. He explained, “Customization and flexibility is a bonus. I’ve been pretty demanding. I’ll say ‘I really want to do this, and I know it might not be easy, but the GainSeeker Suite has come through.”

Simpson has taken advantage of GainSeeker’s customization capabilities to match individual and plant-level needs. This puts him in dialogue with the Hertzler service team to find creative ways to solve interesting challenges.

Although Simpson’s goal is to standardize work as much as possible, he knows he can’t force everyone across all of the facilities to work in exactly the same way.

These dashboards provide real-time visibility to the key performance indicators that people at the plant and corporate level need.

Simpson has appreciated the work of the Hertzler team. He said, “It’s been great. There’s been tremendous support. Pretty much everything we’ve tried to do has worked out and happened pretty quickly.”

Although Simpson is only about a third of the way into their company-wide deployment, the Company is beginning to see benefits. In one plant, just creating visibility into product weight has improved performance.

Simpson explained: “I had a plant that was running 6 grams heavy when we installed GainSeeker. In three months we dropped it to 0.13. They haven’t started really driving improvement projects with software yet. That was just from having visibility to the data and realizing they were running that high.”

For their business, that drop is meaningful because it is a significant reduction in Cost of Goods Sold. As Simpson said, “That’s resin. That’s our most expensive part of the bottle.” 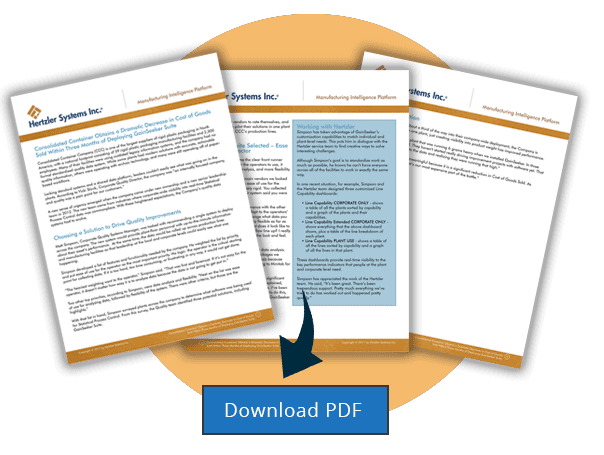