Improvement in control leads to sales growth, more consistent products, and line speeds increasing by up to 20%.

PLZ Aeroscience is North America’s largest custom aerosol manufacturer and packager. They produce their own private brand products and custom formulations, and provide contract filling for other customers. PLZ has been in business for over 100 years and in the last six years underwent significant growth. Recently they realized that their legacy paper-based data management systems also need to change to effectively manage that growth.

PLZ had grown through acquisition and expansion of privately owned brands. As they combined smaller operating entities, each with their own legacy processes and systems, they needed to consolidate these legacy information systems and improve operating efficiencies. They began by implementing a common ERP system, improving their ability to schedule and track orders across all the plants in the enterprise. While that new system showed promise, there was even more riding on the company’s reputation for quality. Thus quality data systems quickly became a focus for improvement opportunities.

As the new Corporate Quality Engineer, Douglas Niemeyer realized that while the legacy quality systems had helped individual companies maintain control, there was a great opportunity for improvement by creating a more efficient corporate-wide system. Niemeyer had spent the formative years of his career in the electronics industry, where access to clean, timely data was taken for granted. At PLZ, inspectors on the shop floor were writing down quality numbers on paper, just as the individual companies had always done before. Quality team members periodically audited the floor, reviewing the data collected on paper and double-checking the line controls. “We would have inspectors on the lines, recording data in spreadsheets. Then the QCs were reviewing that data with a greater focus on keeping the controls ‘In Spec’ versus understanding what the line capabilities really were, and when corrections should be made before a control ranged ‘Out of Spec’.”

It was Very Challenging 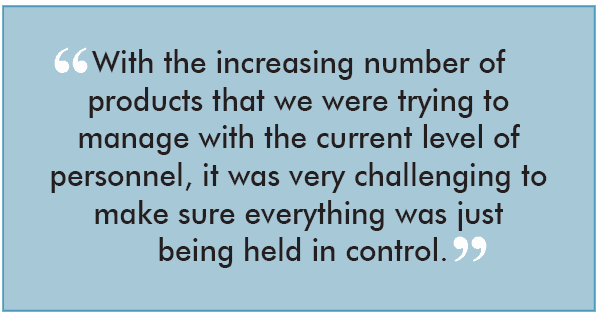 While it wasn’t difficult to see if any of the numbers were out of specification, it was more difficult to understand how the product was running against target. And it was very difficult to compare how different machines or tooling were performing. Niemeyer said, “With the increasing number of products that we were trying to manage with the current level of personnel, it was very challenging to make sure everything was just being held in control.”

Another big problem was that the information was stuck on the factory floor. Problems were hidden and out of sight, and Niemeyer’s team had little time for proactively improving operations. Quality staff spent a considerable amount of time managing rework when processes ranged out of specification. With increased demand for transparency across all the company’s facilities, the practice of shoe-leather- based research proved to be inadequate.

Something Had to Give 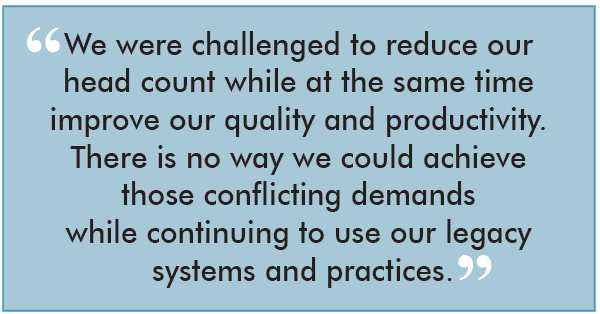 On top of these inefficiencies, the PLZ quality team faced a challenge to bring staff costs in line with new corporate expectations. “We were challenged to reduce our head count while at the same time improve our quality and productivity,” Niemeyer said. “There is no way we could achieve those conflicting demands while continuing to use our legacy systems and practices.”

Caught between high corporate expectations, the current reality of operating performance, and inefficient supporting data systems, something had to give.

PLZ decided to replace their manual, paper-based quality tracking processes with a single, state-of- the-art computerized system. With immediate access to timely, accurate quality data, they believed they could address a number of performance issues.

One of the legacy plants had successfully used Hertzler Systems’s GainSeeker Suite for several years, but the corporate search team wanted due diligence to select the best solution. After a thorough competitive search, the team selected GainSeeker because they were confident it had the flexibility to handle the volume and diversity of products the company manufactured.

Implementing first on two lines at their Pacific and St. Clair, Missouri facilities the company began to see immediate payback from their efforts. 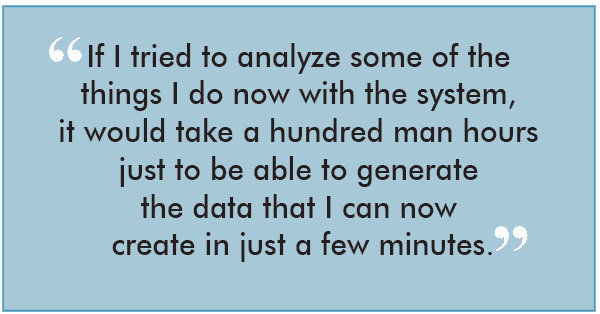 Hertzler worked with the PLZ team to implement a custom-configured deployment of the GainSeeker Suite to match PLZ’s specific processes. Together they set up a system to collect data on the production lines, and in the quality lab. Several dozen measurements were automatically collected from digital gaging equipment, or posted manually using a computer keyboard. These included a variety of pre-fill and post fill weights, pressures, container dimensions, and other measurements. In addition, operators also were given limited ability to enter key performance attributes for spray patterns, visual appearance, and so forth.

Given the company’s high volume and high mix business profile, Hertzler gave special attention to designing a sustainable system for managing the thousands of base products and hundreds of thousands of SKUs. All products are maintained in a company-designed (and very familiar) spreadsheet.

Data is now logged automatically into a single database from wherever the test is performed, either on the production floor or in a quality lab. As soon as they enter data, operators see their data plotted on a chart. These are typically plotted separately by key variables such as filler head. This makes it very easy to see how close individual filler heads are running to target, and to see (and react to) trends before they become problems. 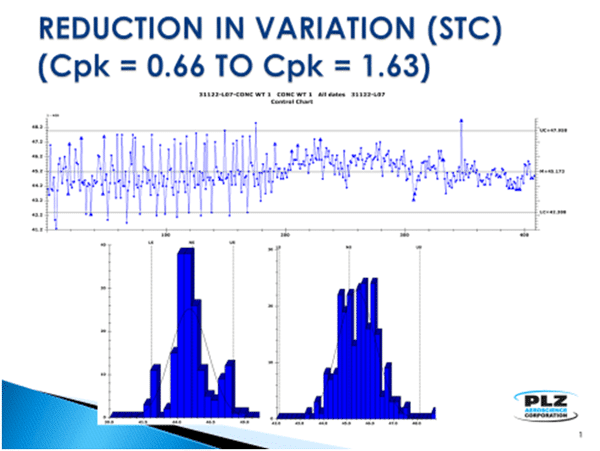 Using GainSeeker Real-Time Analytics, PLZ was able to significantly reduce variation and increase the consistency of their products.

With real-time data visible and available for making better business decisions, PLZ has been able to drive significant improvements in company performance. These improvements include:

With more timely and accurate data, the company has been able to reduce the variation in key fill weights, resulting in both reduced material costs and a more consistent product.

Niemeyer said, “When you have it charted, it makes it very clear what heads are functioning very well versus others that have a little bit more fluctuation happening than what we are comfortable with. That helps draw attention from the line mechanics to taking a look at the specific heads in need of attention so we can correct the problem sooner.”

More consistent products, along with more timely information about problems, has reduced the amount of product placed on hold. Reducing product on hold means that orders are filled faster, and this in turn helps cash flow. On top of that, better control of the fill process means that the company can hit their production targets more consistently, thereby reducing their dependency on warehouse inventory to meet customer order demands. This translates into reduced inventory and lower raw material costs. 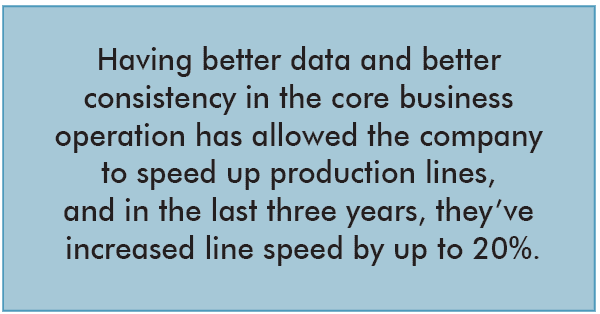 Having better data and better consistency in the core business operation has allowed the company to speed up production lines. In the last three years, they’ve increased line speed by up to 20%.

The company has also been able to delay some investments in capital equipment upgrades due to better efficiencies from their legacy equipment. Lacking highly granular actionable data, many in the company had believed the equipment was doing the best it could, and would need to be replaced in order to improve speeds and fill rates. With GainSeeker Suite, the company has been able to pinpoint precise opportunities for adjustments or maintenance, and maximize the performance of their legacy equipment. While the company may still decide to upgrade or replace this legacy equipment to push even higher performance, it will do so knowing that it has maximized the value of their original investment.

Another key benefit the company has realized is increased flexibility of their manufacturing supply chain. With plants geographically distributed, they can now assign specific production runs to the optimum location taking into account the overall production costs including internal transportation costs, quality loss costs, and so forth. This increased flexibility helps them be more responsive to their customers, and has, in turn, resulted in winning new and expanded business.

What about the original directive to reduce head count? With automated systems that focus on controlling the process, the company was able to reduce their quality department by half, and reassign staff to more productive activity. While that has been a significant savings by itself, it is arguably one of the least important benefits to having actionable real-time data available for better business decisions.

Niemeyer commented, “We’ve shown the system to our higher end customers and suppliers, and they’ve been blown away. We’re leading the way and engaging with more high-end customers.” 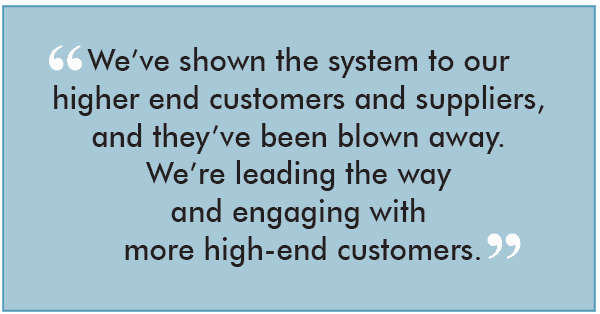 For Niemeyer, the time savings has been enormous, especially given the increase scope of data now being collected. Today, PLZ is managing 100,000 data points a month from 11 production lines at two Missouri plants, and plans to expand the system to all facilities in the growing corporation.

Niemeyer said, “If I tried to analyze some of the things I do now with the system, it would take a hundred man hours just to be able to generate the data that I can now create in just a few minutes.” He is especially satisfied – proud even – of the feedback he has received from customers, of the ripple effect across the company, and of the enormous benefits PLZ Aeroscience continues to realize from these efforts.

Open a pdf of this case study in a new window