In my last post I described an interesting conversation with a customer about his company’s pilot deployment of GainSeeker Suite. You may recall that because of staff turnover, this plant was collecting data but not doing anything with it. The company was feeling pressure from a significant increase in raw material costs, and because nobody in the business knew how to use GainSeeker (because of the staff turnover), GainSeeker was not helping them reduce costs.

I had sat down with the corporate staff guy and the plant quality manager. We had started to review some of the data she had been collecting and used GainSeeker’s Analysis Wizard to drill down on the data and found that Shift A had the highest variance among three shifts, and the six or eight operators on that shift had very different results. (Click on the chart to expand to full size.)

Once we had this chart displayed on the screen, I right-clicked on the chart and then selected the ‘Control Limit Legend’ option. That displayed a list of the 8 different operators, along with the mean and range (with related control limits) of the data for each operator.

Here is how we interpreted this table, along with the chart:

It is clear that one of these operators (710) has a very different process. When you look at the control chart for this operator it is much more stable than the other operators, and when you look at the average for each of the operators, Operator 710 is running at about 173.4g compared to as high as 174.9 for some of the others. (See the yellow highlighted cells in the table). That’s a shift of about 1.5g.

Now here is something you need to know: the critical dimension is weight. Weight is critical because a minimum weight has to be met, but anything heavier than the minimum is given away – the company doesn’t get paid for it. So getting as close as possible to the minimum will reduce material costs – substantially.

We went out to the internet and found a site with typical raw material prices for this commodity. At the volume they were running, the difference between Operator 710 and Operator 214 came out to $457 per day. This is a 24/7 operation, so the annual cost savings between the two adds up to $166,861. And this only one line. This plant ran nine lines. So across the plant the potential savings of over $1.5 Million.

Who was the comedian who said “A million here. A million there. Pretty soon we’re talking real money?”

The other thing that will be obvious to you if you click on the chart is how much more stable the process is in Operator 710’s hands. Operator 214 would be foolish to try to adjust his average down because with the variation he is running, he’d be below specification too often.

Operator 710, on the other hand, could shift his process closer to the lower specification without jeopardizing quality.

So actually the impact could be even greater because the lower specification is 167.6g. If the process is tightly controlled with minimum variation, you can shift it towards the lower spec, reduce material consumption by as much as half a million a year!

Here is another way to visualize what they’re trying to do: 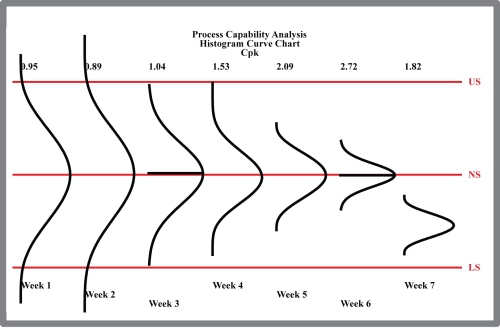 So is there money to be made here?