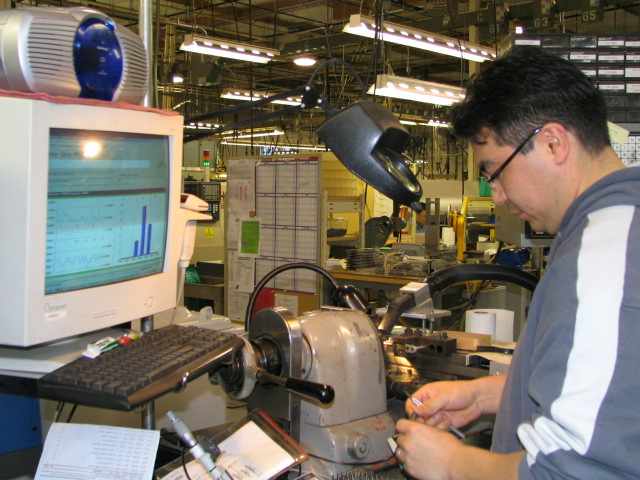 Walking the talk – Backing up ‘Data Driven’ with action

Micropump, a unit of IDEX Corporation, is a leader in product innovation and also a leader in innovation in Operational Excellence.  One area where this innovative spirit is apparent is in providing data for their Six Sigma and Lean projects.

While you’d be hard pressed to find a Black Belt who would say that data is not important, our actions often speak louder than words.  So often, projects are scoped using estimates, Black Belts and Green Belts are left scrambling to find data to quantify the problem.

Micropump and IDEX have used Hertzler Systems Inc.’s Statistical Process Control software to control their processes on an ongoing basis, making project prioritization and the Define and Measure phases of a DMAIC project flow more smoothly.

This article describes how the Six Sigma effort at Micropump and Hertzler Systems’ software solutions have come together to yield outstanding results. Micropump ‘Walks the Talk’ when it comes to providing data to drive decisions.

Micropump has operations in Vancouver, WA, Europe and Asia.  They were acquired by IDEX Corporation in 1995.  The acquisition brought to IDEX expertise in small-volume, precision flow, sealed pumps which are used in the many industries to provide fast, accurate dispensing of fluids in applications like the dispensing of paint pigments and inks or cooling for medical equipment.  In fact, anywhere it’s important to meter precise amounts of fluids consistently a Micropump product may be at work inside the dispensing device.  At home improvement stores, your paint is tinted using pigments dispensed by a Micropump pump.  At fast food retailers, the orange juice always tastes the same because a Micropump is at work ensuring that a consistent amount of concentrate is dispensed every time.  Inside some photo printers, a Micropump is delivering ink to the jets.  Kidney dialysis machines pump filter medium using a Micropump pump.

While Micropump has been in business since 1960 and has been owned by IDEX for eleven years, the innovations in products like these have accelerated rapidly in the last several years because now there’s cash to finance research and development efforts.  The cash isn’t from the benevolence of IDEX, but from the results of the Operational Excellence initiative IDEX management initiated five years ago.

In 2001 the company was in need of revitalization.  Market growth was lagging while operations were not improving rapidly. IDEX turned to Six Sigma to provide the framework and philosophy to move them forward.   Micropump had made local improvements, but without a corporate-wide improvement focus, was struggling to control costs while turning the company around.  The IDEX guideline was to choose the best and brightest and dedicate them to full-time Black Belt roles.  They took a leap of faith and did just that.  With less than 75 salaried employees on staff in Vancouver, they could scarcely afford to dedicate two of their best employees full-time to Six Sigma, but they did.   This was a leap of faith because the costs of the Black Belts were incurred by Micropump, not by the parent corporation.  Adding two people to the headcount would not have happened that year if it had not been supported by IDEX.  Now they had to deliver.

But having the right people in the job working on the right projects wasn’t moving the improvements ahead fast enough.  Jeff Hohman, Micropump’s President, described a moment of frustration early in the Six Sigma effort.  “I had these two high-powered engineers spending hours scrubbing data and building databases to get the information they needed for their projects.”  It was clear to everyone that something had to change so that the Black Belts could spend their time doing more value-added work.

Micropump had to deliver benefits from the Six Sigma effort quickly, and they couldn’t do it if their Black Belts were spending days at a time cleaning up data rather than analyzing it and acting on it.

The quest for clean data

The plant had been using Statistical Process Control (SPC) since the mid-1980’s and was an early adaptor of SPC software.  The SPC software that was in use when Six Sigma was launched was providing data about machining, molding and product testing processes in the shop, but extracting information to fuel the Six Sigma initiative was time consuming and required a lot of time to be cleaned up.  “Who knew how many ways there are for an operator to enter their name?” said Charlie Carr, Micropump’s V.P. of Engineering and one of the first Black Belts.  Even with experience interpreting the data, hours were spent sorting out bad data points, standardizing formats, and tying information together from disparate sources.  And as the process ran, and more data was generated, the same activity had to be done again and again. 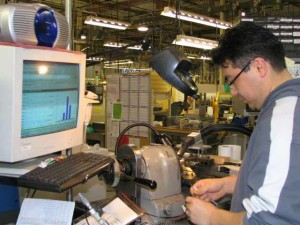 With no way to limit the types of entries users were making, data errors like the inconsistent operator name were commonplace.  Out-of control reasons could be entered free-form, making root cause analysis a painstaking effort.  And finally, all data had to be moved into another application (even if no “scrubbing” was required) to be imported into Minitab for further analysis.

The first projects were focused on on-time delivery for their customers.  But on-time delivery data was not readily available.  It had already become apparent that a new SPC package was needed, and one more requirement for it became clear.  It would need to work with transactional processes as well as manufacturing processes.

When the search began for a new Software package, a team was assembled and, in true Six Sigma fashion, a prioritization matrix was developed.  The CTQ’s identified were data entry mistake-proofing tools, RS232 compatibility, the ability to collect more data with no more operator pain, the ability to interface with existing databases and software, and ease of use – by both operators and engineers.  The solution they found was from Hertzler Systems Inc.  Their GainSeeker and Defect Management Systems packages fit the bill.  Not only could real-time checks be done on the data to ensure that it “made sense”, but exporting data to Minitab was simply a few clicks of the mouse.  The sales people and technical support team from Hertzler didn’t flinch when asked about applying SPC to transactional processes.

The Defect Management System was set up immediately to capture reasons for missing delivery deadlines, providing reliable information for the Black Belt projects. Then training was conducted at Micropump by Hertzler technicians to train key people to take advantage of the programming and analysis tools available in the Hertzler software.

The Director of Operational Excellence, Karen Carter, doesn’t hold back when asked about her experience with the Hertzler team.  “Not only is it a great product, but the customer service we’ve received is just outstanding.  The on-site training they provided was invaluable, and they’ve always been there when we needed their help setting up data collection in our global operations.” 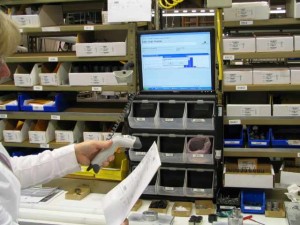 The more the software selection team worked with the Hertzler Systems Inc. team, the more the potential of the application became apparent.  Now, after implementing GainSeeker, operators are prompted when it’s time to take a sample, and GainSeeker interfaces with reference tables in the MRP system which is updated nightly.  Because every data entry is an opportunity for an error, pre-filling demographic information from reference tables from other databases is used extensively.  Additionally, lot traceability is maintained throughout the manufacturing process using barcodes printed on job tickets.

In final assembly, when pump calibration is complete, the calibration settings are captured in the SPC database and the data is sent to label printers which print the part number and serial number along with the calibration information for the pump in alpha-numeric and barcode form.  Additionally, a flowmeter calibration database is referenced by GainSeeker which provides precise calibration equations for conversion of test equipment input into customer required units.  Now when the customer installs the pump in its equipment, the correct calibration settings and the pump serial number are retrieved using barcode scanners.  Not only have they streamlined the internal operations at Micropump, they have helped to mistake-proof their customers’ processes and provide product traceability as well. 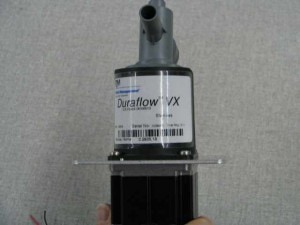 Additionally, Black Belts and Engineers have access to the data they need to make design decisions – and its right at their desktops.  When considering a product change or redesign, process capability data is readily available.  Six Sigma project scoping has been simplified tremendously because now clean, reliable data is available during the Define phase.

The entire DMAIC framework depends on the availability of reliable, quality data.  In many companies, no provisions are made to ensure that key process information will be available when needed.  The scenario experienced at Micropump early in their deployment is all too common – Black Belts designing redundant databases to capture process information for their projects, which stop when the project is closed.  But now at Micropump, availability of data is a real priority.  Micropump has been a leader within IDEX to improve access to data for ongoing process control, for process analysis, and to maintain the gains of their improvement efforts.  Now other business units within IDEX are following their lead and quickly gaining momentum.

Over the past five years, the Operational Excellence program has yielded outstanding results for Micropump.  They integrated Lean tools with Six Sigma in 2003 resulting in a 30% improvement in on-time delivery while cutting inventory by more than half.  They are now extending the reach of Operational Excellence into the supply chain and to customers.  Looking at the entire Value Stream yields even greater opportunity for improvement.

Can the focus on building reliable data systems be given all the credit for their success?  Probably not.  But the management team that recognized the need to build a data infrastructure certainly can be credited with enabling Six Sigma and Lean Management.

Perhaps it’s time for the Lean Six Sigma community to stop accepting the lack of clean, meaningful data and to build the foundation needed for process improvement success.

About the author
Teresa Jostes is a Master Black Belt with more than 10 years experience in Six Sigma. She has a BS in Mechanical Engineering, an MBA and is an ASQ Certified Six Sigma Black Belt. Terri first became involved in Six Sigma during her 12-year career at General Electric. In May 2005, Terri launched Data Driven Decisions, a Six Sigma consulting firm. She is an adjunct professor at Capital University in Columbus, Ohio where she teaches their Six Sigma Black Belt program.

Open this as a PDF in a new window